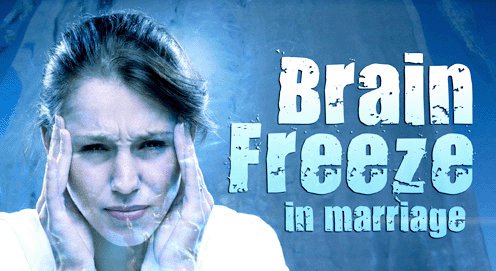 Have you ever had a brain freeze? They hurt! For a few seconds you cant even think.

When we don’t communicate in our marriages it hurts. One of the biggest issues in marriage is communication. Nothing is more frustrating for either one of you than the feeling of not being heard or that your opinion doesn’t matter.

Remember when the two of you were dating and could talk on the phone for hours about seemingly nothing, but you loved the sound of each other’s voice. You planned for the future, talked about what your goals were, how many children you would have what they would look like and etc.

Then you got married and everything changed, reality sets in, because the building of a life is different than the dreaming of a life. The companionship you so cherished seems to slip away into the mundane of everyday life and when you lose companionship in marriage, you are headed for trouble because that was what marriage was designed for, companionship!

In Genesis 2:18 God says: “It is not good that the man should be alone; I will make him an help meet for him”.

The word “help meet” in the original hebrew is translated ezer kenegdo and means “one who is the same as the other and who surrounds, protects, aids, helps, supports.”

There is no indication of inferiority or of a secondary position between the male and female in spheres of responsibility, authority, or social position.

What God had intended was to make a power or strength for the man who would in every way correspond to him as an equal so that the two of them could serve each other.

The ability to influence and the willingness to be in touch with each other are key elements to a healthy marriage.

The good news is great communicators are made, not born. Through diligence and effort, anyone can become better at expressing himself or herself. Do you think you express yourself well, better yet, does your spouse think so.

Time for tune up!

One of the first things that you have to recognize is the way your brain works. There are two sides to your brain, the left side is the logic side while the right side is the more creative side. The two sides are meant to work together not separately.

The left side or logic side takes the information and processes from details to the big picture, while the right side or creative side processes big picture to details. The two sides are designed to work together in a combined effort, which gives both perspectives.

But what is even more interesting and amazing is this is how men and women think and process.

What do you get? Two perspectives! Which is the very best way to analyze a situation. Ever heard of brainstorming, that is what your supposed to do, together.

Your brain has two sides but its one entity. God made you one in marriage, two people but one.

When you communicate you need to have both perspectives. Shutting down your spouse and always thinking you are right, is shutting down the real answers to your problem. Learning to listen and respect each other’s opinion even if you don’t agree is the key to marriage.

Remember without your spouse you have half a brain! Not listening produces BRAIN FREEZE!